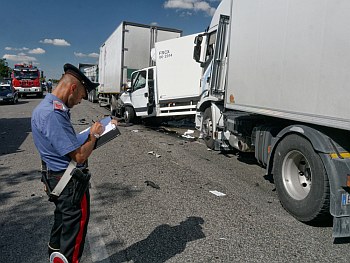 Dr. Terry Bunn, director of the Kentucky Injury Prevention and Research Center and an author of the study, said non-use of occupant restraints is the prime reason sleeper berth occupants are injured or killed in severe crashes.

Bunn said another risk factor that increases the odds of injuries to a truck driver or passenger is the area of first contact in the collision – especially in cases where the front or side of the vehicle is struck.

The study’s results indicate that seating position is not a significant factor associated with an injury in a moving truck collision; rather, the lack of restraint use by both types of occupants was the main determining factor related to injury severity.

Bunn suggested that commercial vehicle carriers should implement and enforce a workplace policy that requires all vehicle occupants – drivers and sleeper berth passengers alike – to use occupant safety restraints while the semi-truck is moving.

However, she stressed that the study’s research team also informally polled 20 truck drivers to discern why sleeper-berth restraints are not used more frequently and came up with several reasons.

“The main reason is that sleeper berth restraints restrict movement and impede good sleep, as they are ‘too tight’ on occupants, especially if the truck driver is large,” Bunn noted. “They say they feel like they’re sleeping in a cargo net.”

Other reasons include the fear of being trapped due to the strict restraining nature of the occupant restraint system, especially in case of fire or rollover, as well as the belief that using such devices isn’t necessary.

Bunn noted that while federal laws require all drivers, including commercial vehicle drivers, to wear seat belts while operating a motor vehicle, there no known laws requiring the use of occupant safety restraints in the sleeper berth.

Bunn also recommended – based on the results from her study – that state laws should be passed to require the use of occupant restraint systems within the sleeper berth similar to drivers in other motor vehicles.

“We would also recommend that a traffic violation for non-use of the occupant restraint system be considered a primary violation, not a secondary violation, in the case of crashes,” she said.

Bunn also noted that the design of sleeper berth restraints hasn’t changed significantly in the last 40 years. “Truck drivers say they will use them if they are comfortable so one way to improve comfort is to have them snap from roof to floor instead of across the body,” she said.

Finally, Bunn suggested that occupant restraint system usage should be mandated by trucking company policy. She wrote that such devices also need to be redesigned to make them more “user friendly” in terms of comfort but still retaining function. “The use of occupant restraint systems needs to be emphasized as part of the trucker safety culture,” she added.

According to FMCSA regulations, truck sleeper berths must have a direct exit; have communication with the driver if not located in the driver compartment; be properly ventilated for protection against exhaust, fuel leaks and exhaust heat; and have an occupant restraint system designed to withstand a minimum total force of 6,000 pounds applied toward the front of the vehicle and parallel to the longitudinal axis of the vehicle.